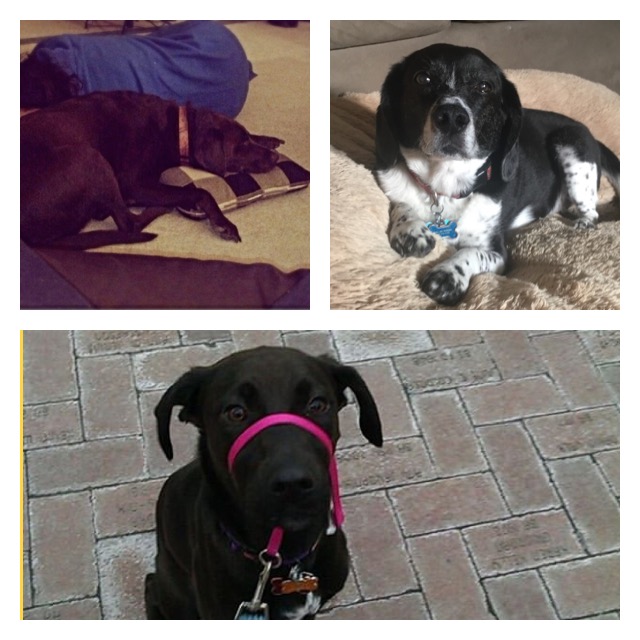 I have had dogs all my life.  A complete mutt named Taz, a beagle mix named Bandit (14 years old now), a chocolate lab named Rowdy, and now a lab/whippet mix named Scooby.

All of these dogs had something different to them.

Taz whipped around the house after he was groomed.  He always left the house lookin like a 40 pound terrier mix and came back this tiny, 20 pound, black dog.  He always tossed his butt up in the air and was ready to run.  He was my very first best friend that drove my parents nuts before I was even a thought to the world.  My parents say they came home one time to find it had snowed in the living room–the bean-bag chair in the corner of the room was completely empty.

Bandit, ever the beagle, loves to sing happy birthday.  His face is completely back with white starting ever so slighting in the middle of the top of his muzzle and covering about a half an inch around the sides of his nose and continuing down his chin.  In his younger years, he was part cat-part beagle.  You pet him for a little and he gets his fill, then goes sniffing for bunnies, squirrels, other dogs, cats, whatever entered our yard.  His big, flat, pancake ears wafting all of the smells into his nose.  He’s now more of a cat than a beagle, enjoying the sunshine and now preferring snuggles to sleeping on his own…most of the time.

Rowdy was the MOST EXPENSIVE, FREE DOG my parents have ever had the pleasure of owning.  See, Rowdy came from my aunt, pure-blood chocolate lab, sweet as can be, all for free.  Then, around a year into having him, my parents noticed he drank a lot of water and peed in the house which was EXTREMELY weird.  About $1,700 in vet bills, we come to find out he’s just a little nuts and we have to monitor his water intake.  He also had what we (my family) call “the Rowdy head”.  He had the body of the runt of the litter and the head of the biggest lab I have ever seen.  You remember those “the dog” toys from McDonalds that had a giant head with a tiny body? Yup, very adorable and very Rowdy.  He needed people or places to rest it on whenever he was still (which wasn’t often).  Pictures don’t do him justice.

Now, Scooby.  Scooby is my very first dog on my own.  She came from a shelter as well.  First, a kill shelter in one state over and then the shelter where I found her, which was a 40 minute drive from my house.  The employee showed me three of their labs in the facility.  One a black lab that was about three months old, a yellow lab around five years old, and a chocolate lab mix around 10 months-2 years old.  They take me to a room on my own and sat me down, and left the room to get the dogs.   This small, lanky, chocolate lab named S’more came busting through the door and my face was wet with dog slobber before I could even say hi.

Favorite dog food: whatever has cheese on it.  Or frosty paws. (both are only special occasions)

Visits to emergency vet and affectively giving her mother a panic attack: 2

Amount of times I’ve thought she is an adorable nut case: the limit does not exist.

One thought on “Four legged creatures in my life”