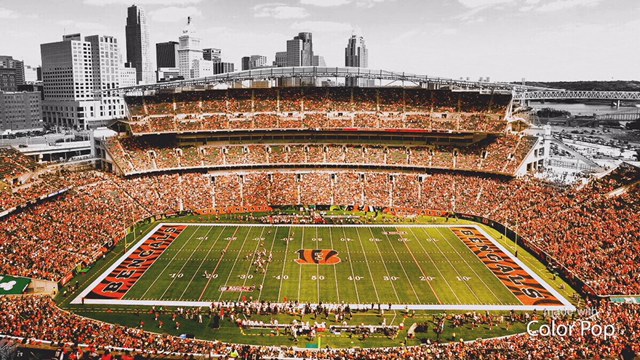 My mom and I were watching Invincible, the Vince Papale story, played by Mark Wahlberg, of how he became a Philadelphia Eagle.  While he’s the main character of the movie, I think Janet is the one I always look forward to.  Main reason?  I can hear the same questions she gets throughout the movie shooting at me if I move out of Cincinnati.

“Alright, already, sweetheart.  You’re such a Giants fan?  Name me a Giant, any Giant.”

My mom even said “you know, someone is going to ask you that someday.” And you know, I don’t have a great answer.  I grew up here, its what I know, its what I’ve grown up with.  It’s like going to college and rooting for your team, obviously you’re going to want your team to win.  You don’t root for a different college, that’s just weird.

No, while I’ve been alive, we have never had season tickets.  We used to buy one pair of tickets each year from one of my mom’s coworkers and go see a game, usually my dad and I.  My one stipulation? No Bengals vs Steelers.  Ever.  I will never go see a game in person.  I don’t even like watching it in a bar.  But that’s a different story.

I have been to a game in the pouring rain (which was possibly the coolest final 5 minutes I’ve ever witnessed).  I have been to a game sitting on the Baltimore Ravens side to hear some guy behind us scream himself hoarse saying “here comes the PAIN” and leave as soon as they started losing.  I have been there to see my mom’s company on the big screen for advertising.  Two weeks ago, I was finally at my very first tailgate for a Bengals game (thanks Grace and Bryan!).

I remember waiting outside a small little pro shop for a signature from T.J. Houshmandzadeh and I can’t remember what or if I even got a signature.  I just remember him walking outside and my short, younger self feeling like I was looking up to a sky scraper of a man.  My mom and dad laughing at my amazed look.

I remember seeing Jerome Simpson (not gonna lie, I thought this was Chad “Ochocinco” Johnson until like five minutes before writing this.  See? Not a perfect fan) flipping over the Arizona Cardinals defense for a touchdown.  This dude FLIPPED OVER a PERSON and STUCK THE LANDING for a touchdown.

Now I may not know stats from the 80s or 90s or even really solid ones these past few years.  I know a few reasons why the Steelers and Bengals have such a horrible rivalry.  I can see when refs are being unfair in any game (in my opinion).  I know enough to make jokes with other football fans and understand them.  And yes, I know the Bengals haven’t won a play-off game since 1991.

I didn’t say being a Bengals fan was easy, it runs in my blood.  Black and Orange. Who dey.